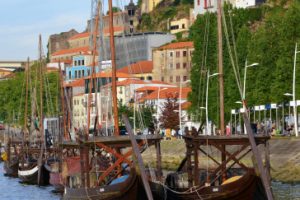 Follow gardatravelclub
Just 2.5 hrs from Dublin, Porto is an ideal destination for a city break.
Porto is situated on the Northwest coast of Portugal and known for its stately bridges and port wine production. In fact the town gave the country (and port wine) its very name. It’s Portugal’s second largest city after Lisbon.  Sometimes called Oporto, it’s an age-old city that has one foot firmly in the industrial present. The old town, centered at Ribeira, was built on the hills overlooking the Douro River, and today is a UNESCO World Heritage Site.
The 14th-century São Francisco church is a main attraction, as are the local port wine cellars, mostly located across the river at Vila Nova de Gaia. In the medieval Ribeira (riverside) district, narrow cobbled streets wind past merchants’ houses and cafes. São Francisco Church is known for its lavish baroque interior with ornate gilded carvings.
Clérigos Tower is the iconic baroque bell tower of Clérigos Church. An old tram follows the river to beachside bars in affluent Foz. Up the coast is fishing port Matosinhos, where seafood restaurants offer grilled sardines on the street. The 1886 Dom Luís iron bridge has a walkway that crosses the Douro River to the port wine lodges of Vila Nova de Gaia.
So plenty to do and see in Porto for every type of traveller.  Contact us now for more details.

Subscribe to our e-mail newsletter to receive updates.
Lillian Quill
Been a member of the Club a good few years and have always found the staff very supportive and helpful. I particularly like being able to email staff. Tickets and Vouchers always arrive in time. GHTC is my first port of call when booking a holiday and I have never been disappointed.
Maura Gilmartin
From the group organised holidays to individual ones Garda Travel Club are exceptional. I have booked holidays out of the ordinary and they have gone to great lengths to facilitate my needs, and the attention to detail has been second to none.
Florence Fitzpatrick
Staff always professional, knowledgeable and courteous when booking holidays at home and abroad, seeking advice on destinations, accommodation and various activities. I have recommended the Club to family and friends and will continue to do so.
Denise O’ Sullivan
Thanks again for sorting out my flights to New Zealand for Xmas plus sorting out the overnight in Dubai. Had a wonderful time.
Eithne and Dan O’ Sullivan
We would like to take this opportunity to congratulate everybody involved in the organisation of the group trip to Sorrento. It was a fantastic experience on so many levels, from the fantastic location, informative tours and the friendliness and helpfulness of the Club rep Jerry Twomey. The group dynamic was excellent despite the broad range of ages. We look forward to the next organised trip.
Richie and Ann Sheehy
Just returned from Sorrento having spent a glorious week there. This was a wonderfully organised and thoroughly enjoyable holiday. This was the first time using the Club for many years and we were delighted with the results. The hotel was beautiful and the organised tours were very enjoyable. Really looking forward to the next trip.
Geraldine and Michael Carr
Thanks to all in the Holiday Club involved in the group trip to Sorrento.We had a great time, great bunch of people, Jerry was a terrific leader and everything went without a hitch. Looking forward to news of the next trip!
Siobhan & Joe Hanley

Back a while now from a trip to SA that you arranged and just wanted to give some feedback .

Every aspect of it was fab .

Illios ( I think that spelt incorrectly ) were great , there attention to detail was excellent and their guides were very knowledgable and helpful .

All the hotels were beautiful especially the game reserve  all inclusive.

A really good experience and a great snapshot of the Capetown area Thank you , Sharon and Joe Hanley .

Mary, Sean & Connor
Just to say thank you to all for organizing St. Patrick's Wknd trip to New York.  It was amazing......so glad to have been part of it.  Lovely travel companions & big shout out to Martin.....a true gentleman....so calm, helpful & got us through few days without missing any opportunity to get most out of every minute.

This was an opportunity of a lifetime.......the parade of so many Gardai showing pride in their chosen career & representing their country so very well.......we will never forget it.

I would advise any member......any age... to consider this in the future.

We had a fantastic trip (to India). Possibly the best holiday we were ever on. Guide, Bus Driver and helper couldn't have done more. The hotels were fantastic. I didn't hear a single complaint. Also the group contributed greatly to the success of the trip.Every day was full on with plenty of places to visit.Thank you and the Holiday Club for all your assistance and help in the lead up to the holiday. Also the money back for the price of the visas which you negotiated was a bonus.

Bernie & Ken Kennedy
A brilliant trip (to India). Thank you for hand picking the group!!! What a lovely bunch of people. The guide Abbie was so full of knowledge and experienced in what he did. I certainly learnt loads on the history of India. The driver, Harry did an amazing job keeping us safe on the roads which usually ended up in total chaos ,once we reached the cities. He dodged cars ,motorbikes, people, cows and other animals, always keeping his cool and leaving us totally unfazed at what we were seeing outside of the bus. And as for VJ, the 3rd member of the crew. He looked after all so well ,cleaning the bus and making sure we were always safe on and off the bus.  A huge 10 out of 10 for the crew in India. The hotels were great, even though we didn't get to stay very long in any of them as we were out early in the morning and back just in time for dinner in the evenings. As I said before, we were absolutely blessed with the group of people that we travelled with. A great bunch of people. Would highly recommend the trip for further travellers. Say hello to Jerry, William, Martin and Liam from the Garda Club. They certainly did the Garda Club proud. Back to reality now and hopefully our next trip abroad will be as enjoyable.
Jane & John O’Keeffe
Have to say we enjoyed the trip (to India), the company of other travellers and the professionalism of the Travel Department. Have just booked your trip to Tenerife for February.

The Garda Holiday and Travel Club Ltd. was formed in January 1991 for the purpose of providing holidays and travel arrangements at the keenest possible prices for it's members. Read More...